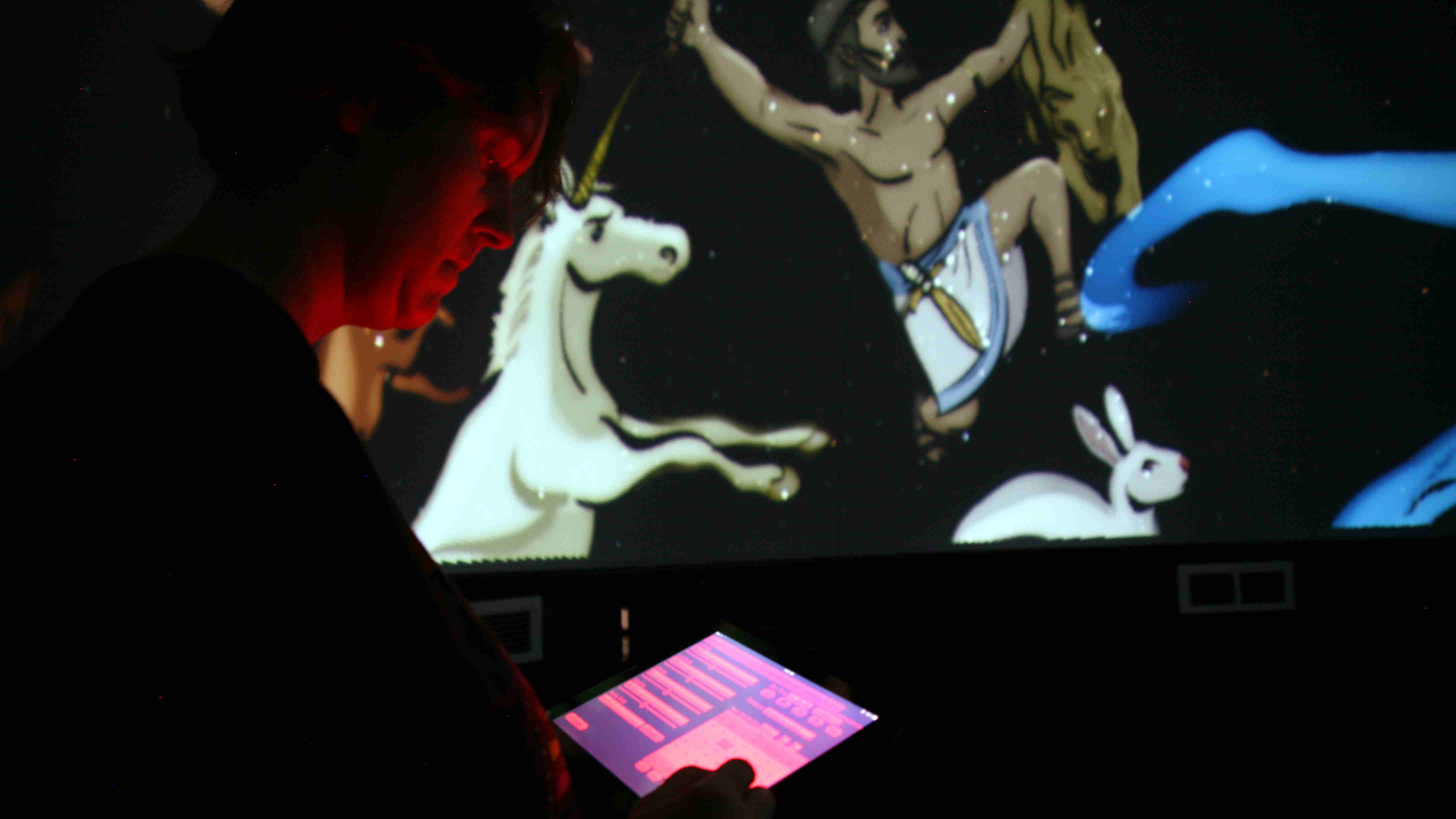 Why pick one planetarium software package over another?

As planetarians, we all have to make decisions on what software to use. Having extensive experience with both UNIVIEW and Nightshade NG, I wanted to share my experiences with both.

The first planetarium software I ever used was UNIVIEW, created by the now defunct SCISS. This was years ago at the Denver Museum of Nature & Science’s Gates Planetarium. I was tasked with creating a prototype program to bring live programming back to a planetarium that had been showing only movies for years. Over time I became an accomplished UNIVIEW “pilot” able to walk and chew gum at the same time, or in other words, create consistent visual movements while also engaging in guest interaction.

One of the biggest challenges we faced early on was creating audience interaction. Gates is a unidirectional dome with a capacity around 122. UNIVIEW is driven from a desktop console at the back of the dome. At first we tried having guests shout out their questions. As you can imagine, these were not the most satisfying experiences for audience or planetarian. I then would start down one aisle soliciting questions and destinations. I’d gather five or six suggestions, then run back up the other aisle to the console to fly the show. While these were fun from my point of view as a presenter, they lacked true interactivity. Sure, guests could shout their questions back to me, but it didn't make for a truly audience driven show. After several more experiments we settled on a system with two staff members: a pilot at the console and a master of ceremonies in the audience relaying their requests and questions.

Later, I moved to Seattle to oversee the Willard Smith Planetarium at Pacific Science Center. The relatively new and expensive German digital projection system was frequently inoperable. When it was being serviced, we used an older Digitalis portable system, borrowed from our outreach department, so we could continue delivering shows. When we first set it up I asked where the control console was and was instead handed a Digitarium remote control. There was no console! Everything was accessible with a handheld remote control. I was skeptical but intrigued and with less than an hour of training was able to give a sky show, using just the remote.

As I researched replacement systems, I kept thinking back to Nightshade and that Digitarium remote. I saw a demonstration of Nightshade NG using both the remote and the Universal Console GUI on an iPad. Suddenly the question of guest interaction I had been struggling with was answered. With Nightshade NG, complete control of the system was available in my hand. I was no longer tied down to a physical console. My planetarians could devote themselves to interacting with their guests, not controlling the system. With great ease of use, minimal maintenance, calibration free projection, high resolution, and an affordable price, a Digitarium Kappa with Nightshade NG was exactly the system to revive the Willard Smith.

The system I replaced had its own proprietary software as well as UNIVIEW, but the staff did not have enough training to use UNIVIEW effectively. I trained the staff on both UNIVIEW and Nightshade and continued to use both applications for a time. For more complex shows, like one about Chinese astronomy, I more and more found myself creating them in NG. Once I realized that StratoScript had the ability to create the equivalent of UNIVIEW Custom Modules, I realized NG was more flexible than Uniview.

The Augmented Lessons function of the Universal Console gave me the ability to have fully scripted shows available for my planetarians, while also giving them the freedom to customize the presentations to their style. NG also deals with computer memory issues more efficiently than UNIVIEW, giving me the ability to add content without bogging down my system. I trained all new planetarians on Nightshade NG first, because UNIVIEW has a much steeper learning curve. When SCISS went bankrupt and was liquidated in early 2019, I found the majority of our shows were already in NG and the ones still in UNIVIEW were easily convertible.

Now that the UNIVIEW assets have been purchased by ZEISS, there appears to be a future for that software. However, Zeiss is not offering support for UNIVIEW or Colorspace projection systems previously sold by SCISS (see this FAQ). That means operators would be prudent to look at upgrading to a supported software platform, like Nightshade NG.

Let’s look at some key comparisons between Univew and Nightshade NG, starting with training. Over the years from Denver to Seattle I have trained many people on the use of UNIVIEW. I created a 90 minute training syllabus to go over the basics of UNIVIEW. I’d then give planetarians practice time. On average it took 5 hours after the introductory training for someone to be able to give a show. With the introduction of UNIVIEW Panels I could abbreviate this. In a couple hours I could give someone just enough training to push my pre-programmed buttons in order, one-by-one. This allowed someone to “do a show” but it made the process of learning the program much slower.

Training someone on Nightshade NG is much faster. I’d have them spend 45 minutes to an hour with an experienced user going over the remote and the Universal Console. After this most users were ready, and eager, to do a show after only an additional hour of practice. They also became advanced users much faster, willing to improvise and explore with confidence.

Another huge difference I found was how the two programs let you add content. UNIVIEW has you create a profile which you launch with all of the settings and content you will need for a show. Thanks to years of content creation by users across the world, UNIVIEW does have an impressive array of custom modules which can be added to your profile. You can also add images of your own (charts, diagrams, high-resolution close up pictures). All of these things are loaded into memory when you launch the profile. You might not use a collection of images for the first 40 minutes of your presentation but they are loaded into memory for the duration. It can be slow to load profiles in Unview. With NG, whether adding a surface layer over a planet, a 3D model of a solar system body, a picture, or even a full dome movie clip, you don’t load it into memory until you need it and you can immediately drop it out of memory when you are done with it. This means you won’t overtax your system.

Then, of course, there is the night sky. Both NG and UNIVIEW allow you to “fly” around the planets, or galaxy, in your magical planetarium spacecraft, that uses no fuel, is not affected by gravity, and travels far faster than the Starship Enterprise. But what about the sky tonight? The bedrock of what we do as planetarians is showing our guests what they can see in the night sky with their own eyes. No version of UNIVIEW has ever been adept at observational astronomy shows and it's really hard to get a realistic star field. As for doing a star show, everything is buried. Getting to constellations requires drilling quite deep into an object tree. Just being able to look at the night sky from your home location and watch a planetary conjunction over the course of a week requires creating multiple custom settings and multiple trips to your fixed console. Finding the meridian, ecliptic, and constellation art is all so convoluted I would never do an observational show in UNIVIEW.

In NG it’s natural, intuitive, and right out of the box. This means you can quickly adapt to your audience. Most of us have gotten the question, “what’s the difference between a star and a planet?” Sometimes you might get this question when you are in the midst of a presentation about the geography of Mars. In UNIVIEW, unless you have anticipated the question, even the most experienced pilot will be unable to set up the demonstration quickly. In NG, at the push of a button you can be at home on Earth, then quickly find a planet, turn on the ecliptic, and jump a few sidereal days into the future to show how planets move compared to the stars. You can also just as easily jump back to space to see those planets orbit the Sun, then head back to Mars and continue to search for water.

Creating Augmented Lessons and StratoScript for a Digitarium system is fun but it was also the biggest adjustment for me. In UNIVIEW I am adept at quickly adding objects to a Panels presentation and creating Custom Events (UNIVIEW’s version of scripting). While Panels are more limited than Augmented Lessons, there is a drag-and-drop simplicity to them that isn’t mirrored on the Digitarium. If I was writing a presentation with a long lead time, an Augmented Lesson was my choice. If I had to write and give the presentation tonight, UNIVIEW’s familiarity won out. But as I became more adept at using NG I realized I didn’t need to script everything that I had to in UNIVIEW. Since I have full control of the system from the Universal Console, scripts can be reserved only for complex tasks, more associated with creating Custom Modules (UNIVIEW’s user-created add-ons).

So let’s go back to my original question: why choose one planetarium software package over another? In many ways it comes down to philosophy. In my opinion, the ideal planetarium show is a conversation. It’s not me droning on in full lecture mode, and it certainly isn’t a movie. It’s a live show. It will have a theme, of course, whether that’s the search for life on Enceladus or telling Native American constellation stories. But it is adaptable and responsive to audience questions and interests. When I am holding the Universal Console in my hand, I have complete access to all aspects of my planetarium. I can sit next to a guest to explore a question together, or even let a young guest push the button to turn on constellations. I can simply have a conversation—guided of course—but focused neither on me or the special effects. It’s a conversation focused on the guests. With Nightshade NG, it’s easy to have those conversations.

These conversations are what attracted me to work for Digitalis. I’m passionate about planetariums, passionate that they continue to be live, engaging places. Of all the companies that create hardware and software for planetariums, many seem focused on creating effects and playing movies. They are technological marvels created by technicians to be used by technicians. At Digitalis, we are educators, creating marvelous technology to be used by other educators. We never lose sight of the fact that our end user is a 10-year-old, visiting the planetarium with her grandfather for the very first time. We want to give the planetarian the tools to make sure that guest, and all guests, experience the wonder that comes from learning.

Dave is an Education Specialist at Digitalis. He is a large part of the Technical Support team, helping customers and traveling to provide regional training sessions. He enjoys creating content for the Digitarium Community and giving public shows for special events at the on-site Pacific Planetarium.